Perhaps more astounding than the acts of conjuration and theurgy contained in the Lesser Key are the scrying arts of King Solomon. Scrying is the foundational practice of King Solomon’s magic and if we are honest, all of the occult. Its method formulates the Golden Triangle by the unification of psychology, physiology, and psychicism. Arcanum hid by secretive orders of the upper echelon magi whose genetics dripped into the bloodline of today’s elite families. Outside of the rare tribal lineage which successfully transmitted those secrets from sorcerer to apprentice, scrying and its process of development are unknown to modern occultists.

To formulate the Golden Triangle, one must bring his or her “three wills,” under a singular and authoritative control. The will of the mind, the will of the body and the will of the spirit all must come into alignment. Without the Golden Triangle, the magic of Solomon will not work. The three divided wills shall fetter the intent of the magician. Occultism is not a game of horseshoes where close-enough counts or “two out of three ain’t bad,” in terms of mind, body, and spirit. A disconnect with one is a disconnect with all.

So by what mysterious mechanic does the practice of scrying integrate these three-component qualities? Like most things regarding the occult, the answer while simple is also profound. Integration comes as a result of exercising the occultist’s psychology, physiology, and psychicism toward a specific end. Any serious practitioner of the mystical arts would do well to study the occultic works of L.W De Laurence. His books published in the early 1900s. They read like technical manuals, it is the occult sciences after all, and are devoid of New-Age schizophrenia. On the topic of scrying L.W De Laurence’s “The Mystical Test Book of the Hindu Occult Chambers- The Magic and Occultism of India- Hindu and Egyptian Crystal Gazing” is essential reading.

The methods L.W De Laurence instructs for beginning a scrying practice, again, are not tricky pre-say, at least not in their application, but require strict discipline and dedication. Two mandatory demands which have and will undoubtedly continue to disqualify the majority of the western world. Foremost among these methods is strengthening the seer’s gaze through incremental increases of time affixing one’s gaze on a crystal ball or candle flame. For best results, the occultist trains themselves not to blink. This is where the formulation of the Golden Triangle begins.

The eyes or physiology of the occultist reserves the testing ground for the other two wills. The psychology of the occultist quickly gets called into question. Is the mind not strong enough to demand the eyes not blink? What about the individual occultist fails in overcoming discomfort and prevents refocusing of intent to accomplish the task? How is it the spiritual intent of the occultist, his or her stores of inner power, or so easily tapped? What must the occultist discover about themselves and summarily correct to develop their scrying? Scrying practice ensures all three components of the Golden Triangle enter a fiery crucible in preparation for some time under a ruthless hammer.

What happens should the occultist persist in the trials and submit their three wills to be worked over and over? They will discover where once three separate threads hung now a single mighty chain resides. There is none the occultist can blame for failure other than themselves. The work gets completed or not, trials are faced or avoided, time is spent or wasted. Only the occultist may answer which.

Faced with mature personal accounting, the majority occultists avoid authentic Solomonic magic at all cost. It is not gender studies at the community college. There is no professor to cry-bully. The demons of the Ars Goetia care not about identity politics or chosen pronouns, and in fact, they will relentlessly belittle both. Scrying, thereby Solomon’s magic and thus the occult has no place for professional victimology. The Greater and Lesser Keys detail constructing magic circles, not “safe places.”

I am supposed to believe an occultist who cannot gaze into a crystal ball for ten minutes without blinking has the mental, physical and spiritual testicular or ovarian fortitude to evoke King Asmodeus as well as command him to do their bidding? Let alone the astral-psychic senses to hear his raucous hysterical laughter followed by uniquely vile and infernal threats against their lives? I am to accept an occultist who lacks the determination to see into themselves can somehow accurately see into the past, present, and future?

You serious about developing an authentic practice of Solomon’s magic by adherence to a rigid but result-producing protocol? Contact me, and we will begin. 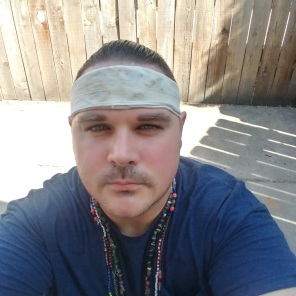 Kevin Wikse or Papa Machete que ganas todas las Batalas is a world-renown circus trained Strongman, Occultist, Martial Artist, Remote-Viewer, Psychic Investigator, researcher, Voudu and Palo Mayombe Priest, author, activist, and adventurer. Spiritual Father of the Temple of the Machete Who wins all Battles, Papa Machete welcomes all people, of any race, gender, orientation or ability. His only conditions are that you love God, love humanity and are willing to stand for what is truly right, not just what is popular.